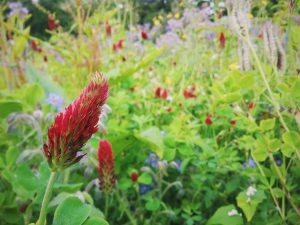 Open-pollination is the natural way that all populations of wild plants breed. It is also the way that cultivated plants have been bred for the last 10,000 years.  With open-pollinated plants each generation is similar to the previous one, and evolution and adaptation within the population occurs over time, in response to environmental pressures and changes. These pressures may come from human intervention or from natural phenomena. With open-pollinated varieties of crops, their genetic make-up is very malleable and their specific traits can be pushed and pulled in various directions depending on the needs of the plant breeder. They can be compared to a lump of hot iron, being carefully and skillfully worked by a blacksmith into their desired tool. Even once the tool is finished it can be tweaked by returning it to the fire, and can even be quite radically changed if needed. In the extreme the blacksmith can totally remake the tool or even use the metal from two tools to make another. As can the plant breeder working with open-pollinated varieties.Open-pollinated varieties can be accessed by anyone and everyone. You do not need to be a professional plant breeder to play around with changing and improving crops, you can do it in your back garden!

Open-pollinated varieties are to tool steel, what F1 hybrids are to concrete

F1 hybrid varieties do not come from populations, but are the result of a specific ‘cross’ between two genetically homogeneous ‘parent lines’. The parent lines often bare little resemblance to each other and are often very weak due to being highly inbred. The offspring (the F1) bares little resemblance to the parents. As they are the result of a cross between two genetically homogeneous parent lines, individuals within the variety are genetically almost identical which is why they are used ubiquitously in industrial horticultural production. They will grow at similar rates and be ready for harvest at almost exactly the same time, which if you are growing 20,000 cauliflowers in one field for a supermarket is a useful quality. Hybrids also show a quality called ‘hybrid vigour’ which is a poorly understood phenomenon, but that can lead to fast-growing plants. So hybrids do have some useful properties, however there are drawbacks. One is that, as with any tool, hybrids can be used for good or evil. Due to the fact that quality seed can not be saved from hybrids, some seed companies (we’ll not mention names) have undermined local subsistence economies around the world by removing traditional seeds and providing their hybrid seed as a replacement. Farmers who wish to use this seed must buy it from the company every year and are at the whim of their decisions around pricing or whether to even continue the variety. Often traditional varieties, which in reality may be better adapted to the specific growing conditions, are lost forever. Another is that they are an ‘evolutionary dead-end’. As they are not formed of populations the only way to produce them is to return to the parent lines and repeat the same cross. This means that they cannot adapt to changing climatic conditions which in the times we live in now feels like a very important quality. It is this quality which makes them more like concrete than tool steel. Once they are made they cannot be remolded, the only way to change them is to return to the parent lines and re-breed the hybrid. As with concrete, you cannot reuse it once it has set, you must return to the mixer and start afresh. If you have a slab of concrete you cannot rework it, but if you have a lump of steel, all you need is a fire.

F1 hybrids are genetically brittle. As they are identical, there is no varying genetic resistance to pest and/or disease pressure between individuals, this varying resistance is called ‘horizontal resistance’, and it is found in any diverse population of plants (to varying degrees). Modern hybrid varieties are bred to have resistances to particular strains of diseases this is known as ‘vertical resistance’. These resistances are very solid as they are genetically fixed. However, as we all know nature is not fixed, diseases change all the time in response to our efforts to overcome them. So when a disease evolves (this can be very frequent), this resistance breaks down and the whole population is susceptible to the new strain of disease, and may be wiped out. So the breeders go back to the lab and breed a new resistance gene to the new disease strain and so the arms race continues. Within a genetically diverse population, there will always be varying levels of resistance to disease, and the most resistant plants can be chosen to save seed from to increase this resistance in the next generation. This is part of the process known as ‘maintenance’.

To understand the importance of effective maintenance in open-pollinated varieties let’s return to our raw materials. Any steel tool which is used frequently will need maintenance. A scythe is a good example of this as when the blade is razor sharp cutting grass is easy and you can cover ground fast, but very quickly the blade will dull, as often as every few metres. If you continue to scythe without sharpening your blade, you will start to struggle and it will become a frustrating process, but if you diligently sharpen your blade every few metres, you will continue to cut effectively, ad infinitum (or at least until there’s nothing left of you blade!). Such is the case with open-pollinated varieties, if they are not maintained carefully year after year they will quickly loose their vigour and consistency, and this is exactly what has happened with many varieties. It is in the interest of seed companies to sell hybrids as they can charge more for the seed and people are not able to save their own. So it is also in their interest to not properly maintain their open pollinated varieties to encourage people to buy their more expensive hybrid seed.


The right tool for the job

In conclusion, its all about choosing the right tool for the job. Personally I would much rather be working with tool steel than concrete. I know where I stand with a lump of metal, and I know I can change it if I need to. I also suspect that the concrete suppliers don’t have my (or anyone else’s) best interest at heart even though they might have the opposite message written on the side of their truck. I will not be making my tools out of concrete any time soon!

We use cookies on our website to give you the most relevant experience by remembering your preferences and repeat visits. By clicking “Accept”, you consent to the use of ALL the cookies.
Cookie settingsACCEPT
REJECT
Manage consent

This website uses cookies to improve your experience while you navigate through the website. Out of these, the cookies that are categorized as necessary are stored on your browser as they are essential for the working of basic functionalities of the website. We also use third-party cookies that help us analyze and understand how you use this website. These cookies will be stored in your browser only with your consent. You also have the option to opt-out of these cookies. But opting out of some of these cookies may affect your browsing experience.
Necessary Always Enabled
Necessary cookies are absolutely essential for the website to function properly. These cookies ensure basic functionalities and security features of the website, anonymously.
Functional
Functional cookies help to perform certain functionalities like sharing the content of the website on social media platforms, collect feedbacks, and other third-party features.
Performance
Performance cookies are used to understand and analyze the key performance indexes of the website which helps in delivering a better user experience for the visitors.
Analytics
Analytical cookies are used to understand how visitors interact with the website. These cookies help provide information on metrics the number of visitors, bounce rate, traffic source, etc.
Advertisement
Advertisement cookies are used to provide visitors with relevant ads and marketing campaigns. These cookies track visitors across websites and collect information to provide customized ads.
Others
Other uncategorized cookies are those that are being analyzed and have not been classified into a category as yet.
SAVE & ACCEPT